It was Day 6 of our 8-day Scotland Kayaking, Walking, & Whisky Tour and our adventurous group of 9 (including our guide Craig) were landing our kayaks at the base of the famous Glenfinnan monument, a 60-foot high memorial to the Jacobite uprisings, towering majestically over the most inland tip of Loch Shiel in the western Highlands.  Leading up to this moment, we had paddled in the famous Glen Coe and among the breathtakingly beautiful Arisaig Skerries, landed on a castle-mounted island under blue skies and in view of the Atlantic, hiked to Highland village ruins and waterfalls, and sampled the varied spirits of Scotland along the way.  It had been an unforgettable mix of adventure, history, culture, and good company and I was already planning when and how I could visit this inviting country and its rich landscape again soon.

In the moments before paddling up to Glenfinnan though, I was eager to wrap up the on-the-water portion of this tour. This was our last paddling excursion of the week, and to be honest the morning's wet weather had me eager to load kayaks onto our trailer, load myself into our comfortable and dry touring van, and move on to lunch, a coffee, and an afternoon power nap before dinner in our quaint guest house near Newtonmore.

As we paddled close to Glenfinnan monument though, Craig was describing to me the area's history, why the Highlander-topped monument stood in that specific location, and how it has become somewhat of a melancholy symbol of the Jacobite uprising that colossally failed soon thereafter. Without re-capping the details here (they are complex and deserving of a more informed account than I can give), this spot and its monument mark what might be considered the beginning of the end of the storied Highland culture.  In short, it was where the second Jacobite uprising began in August of 1745, the location where its leader, Prince Charles Edward Stuart (aka “Bonnie Prince Charlie”) gathered his followers from several local Highland clans, raised his royal standard to stake the Stuart claim to the thrones of Scotland and England, and toasted the ranks’ ambition and courage with brandy.  Sadly, by April of 1746 the Jacobites were defeated, the peak of the Highland clearances followed, and the clans and their culture were devastated.

The majesty of this location as we paddled up and listened to Craig's informative story was magnified by the low clouds, the stones of the monument itself darkened by rain and time, and the Glenfinnan cathedral perched above and to the left of us. The Glenfinnan viaduct (recently of Harry Potter film fame) stood watch several hundred yards in the background, its arches at the moment empty of the steam train it was built for.  Like the Glenfinnan monument we now approached, the viaduct also carried a sense of days gone by, calling out to us to learn more about the history of this beautiful and storied area.

We walked around the monument for a few minutes after landing our kayaks, taking in the descriptions on the gates in both English and Gaelic, looking back onto the loch we had just paddled and up at the towering mountains and mist surrounding it.  Like I had for much of the week, I felt an odd connection to the place, knowing that my own ancestry is largely Scottish or at least of unspecified British heritage.  I didn’t necessarily feel as though I'd been there before, but as though I intuitively understood it - its melancholic beauty, its necessity as a place of remembrance despite subsequent defeat, and the reason people from Scotland revere it and visit in large numbers to this day.

An hour or so later I stood in the Glenfinnan visitor center, clothes mostly dry, thumbing through a book titled "The Highland Clans".  I had been hopefully joking with our guides all week that I was going to find my own clan, adopt its tartan and buy a kilt, and fully embrace my Scottish heritage.  Near the end of the book, in a list of clan descriptions, I found a short but enticing note about Clan “Hay” (very likely a forerunner to the surname “Hayes” of England, Wales, and elsewhere).  This is what that description said: “Holding lands in Perthshire, they were a Norman-French family who were ardent Jacobites and their clansmen followed the Stuart standard in 1715 and 1745.”

I stopped cold, looked out the window at the rainy loch, misty glen and towering mountains, and at the monument to the area’s former residents and warriors.  I promptly purchased the book, felt my intuitive connection to Glenfinnan validated, and walked back to the van eager to answer all the new questions I had about myself and my heritage.

This is why we travel. 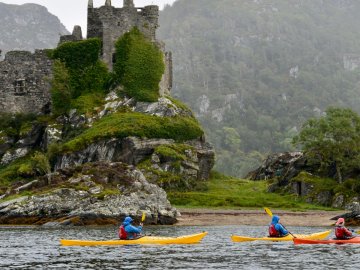 Andy is an Adventure Consultant for Sea Kayak Adventures. 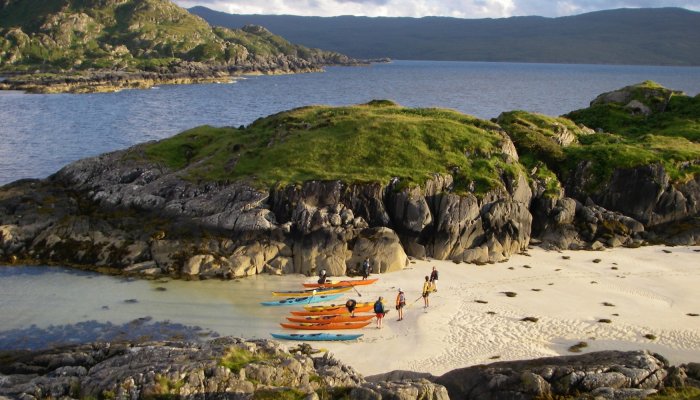 If you're looking for an inspiring read to cozy up with this winter, or you're preparing for your upcoimng Baja tour, we have a wealth of recommendations specific to Baja.

What to Wear Sea Kayaking - Part 2

One of the greatest things about kayaking is the fact that it is a watersport that can be done in a wide variety of weather conditions.

What to Wear Sea Kayaking - Part 1

Kayaking is one of the outdoor activities that is growing massively in popularity these days. Especially as winter settles in here in North America, the idea of heading somewhere warm for a kayak trip in the sun, with clear blue water, bright sandy beaches and beautiful sunshine sounds amazing right now.