It’s the start of cooler temperatures and you’re ready to seek warmth, sun and be Baja bound. You’ve heard about this magical place far away from Cabo, crowds and poolside cocktails. A small lagoon tucked into Baja’s gnarled finger of a peninsula. Magdalena Bay: a place where gray whales arrive each winter during the world's longest mammal migration.

If you’ve heard the call of the whale and are ready to descend into the wild, you’ll probably have some pretty important questions like “when’s the best time to see gray whales in Baja?” Here’s what you need to know. 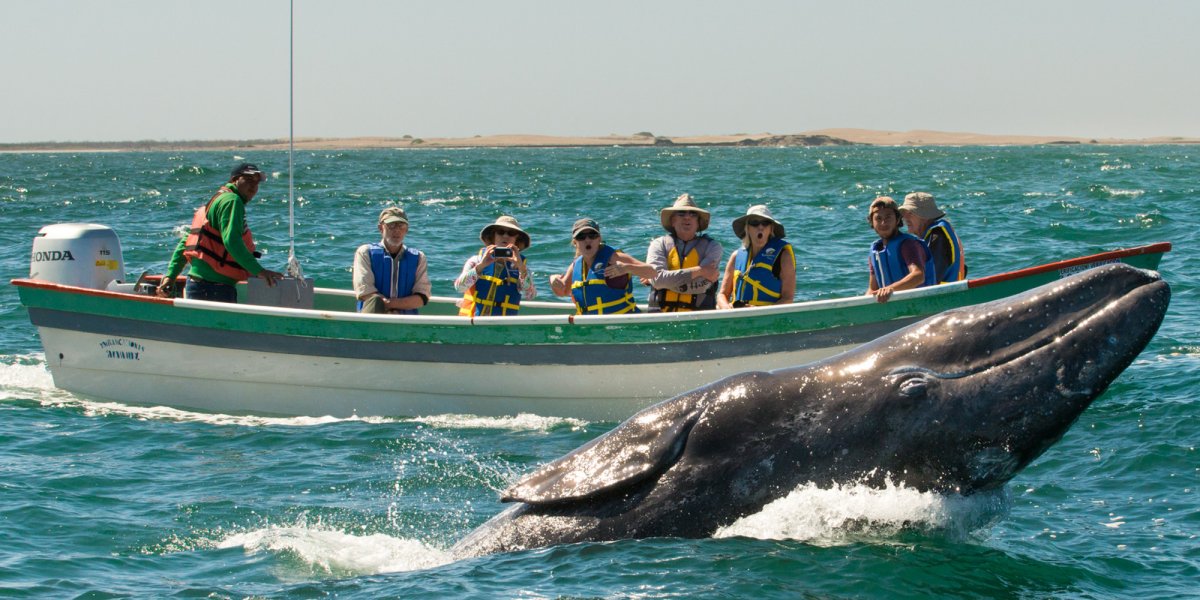 Magdalena Bay is a mecca for wildlife lovers and wildlife itself. Secreted behind Isla Santa Margarita, Magdalena and Santo Domingo, the tranquil bay is a favorite playground and important breeding lagoon for gray whales.

Every year they travel south from Alaska to spend their winter in Mexico to give birth, mate, raise their calves—and play with their human visitors. The protected, calm lagoons are the ideal destination for gray whales to birth and raise their young.

Though Magdalena Bay is a favored destination for adventurists, you won’t see crowds of pangas crusting over the water. Whale watching is carefully regulated here, so it’s just you and the whales coming out to see you. 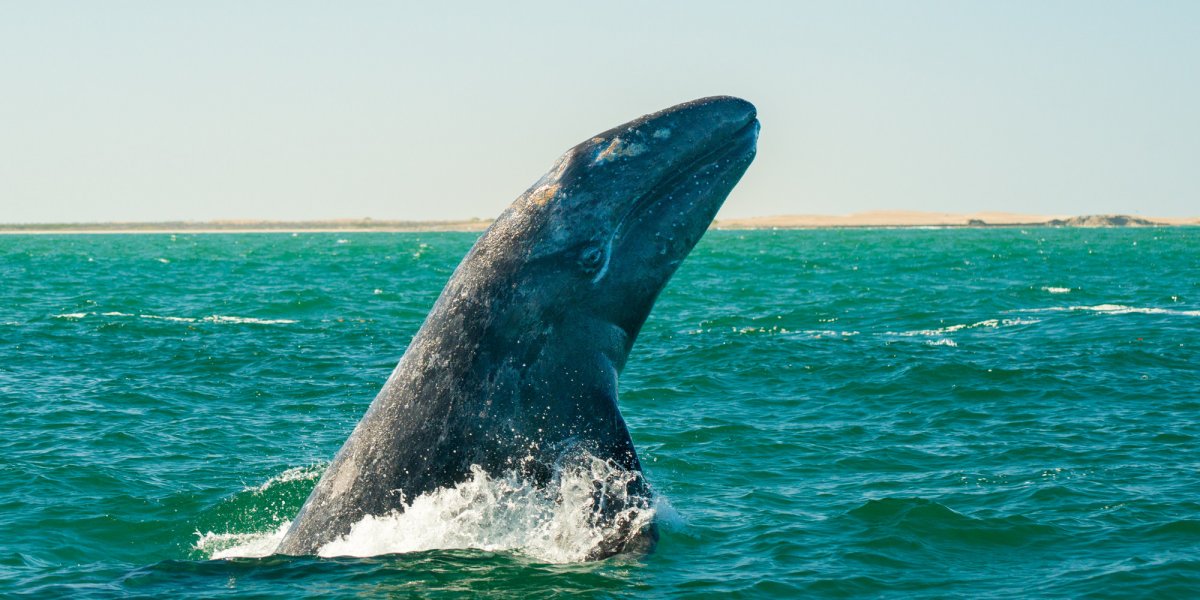 ARE THERE GRAY WHALES IN MAGDALENA BAY YET?

2023 is quickly approaching, and one of the top questions for Baja-bound travelers so far this year is “when do the whales arrive?”

The answer? Baja whale watching may be a year-round activity, but gray whale season peaks in the winter months of January-April. By January 2023, pregnant gray whale mothers and single females looking to mate have arrived in Magdalena Bay. They also frequent two other Baja bays, San Ignacio and Laguna Ojo de Liebre (or Scammon’s Lagoon). 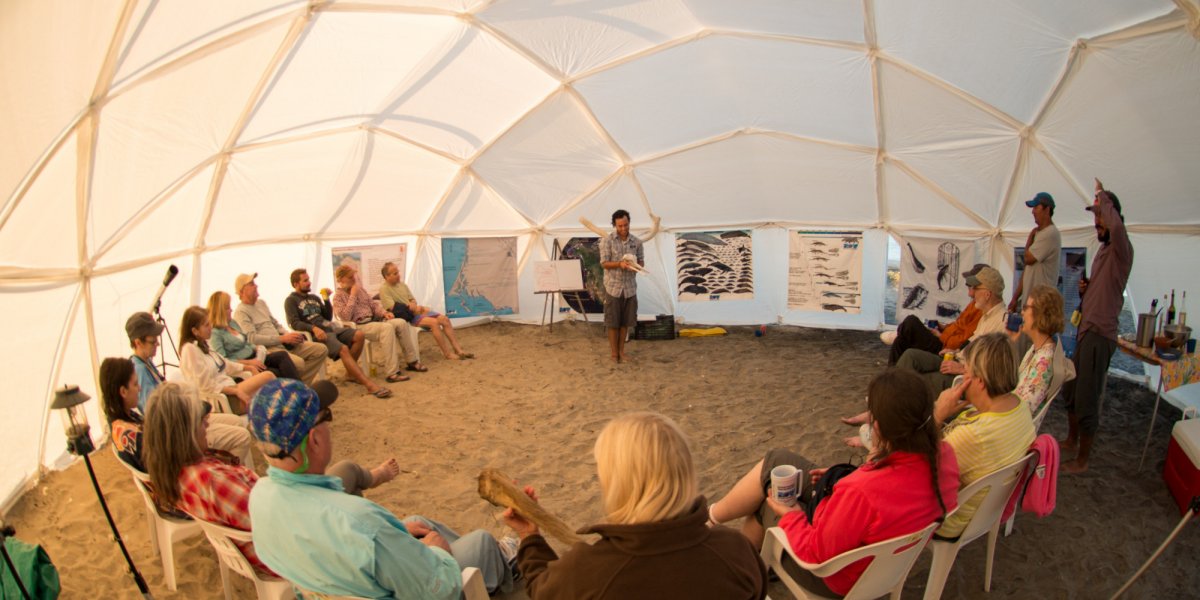 HOW LONG CAN YOU SEE GRAY WHALES IN MAGDALENA BAY?

Every year is a little different and the exact arrival and departure dates of the whales is never known in advance.  In general the whales arrive in late December and early January and stay until early to late April. They arrive in the bays north of Mag Bay a little earlier, and stay a little later, which is why our whale watching trips shift to San Ignacio in late March and April. 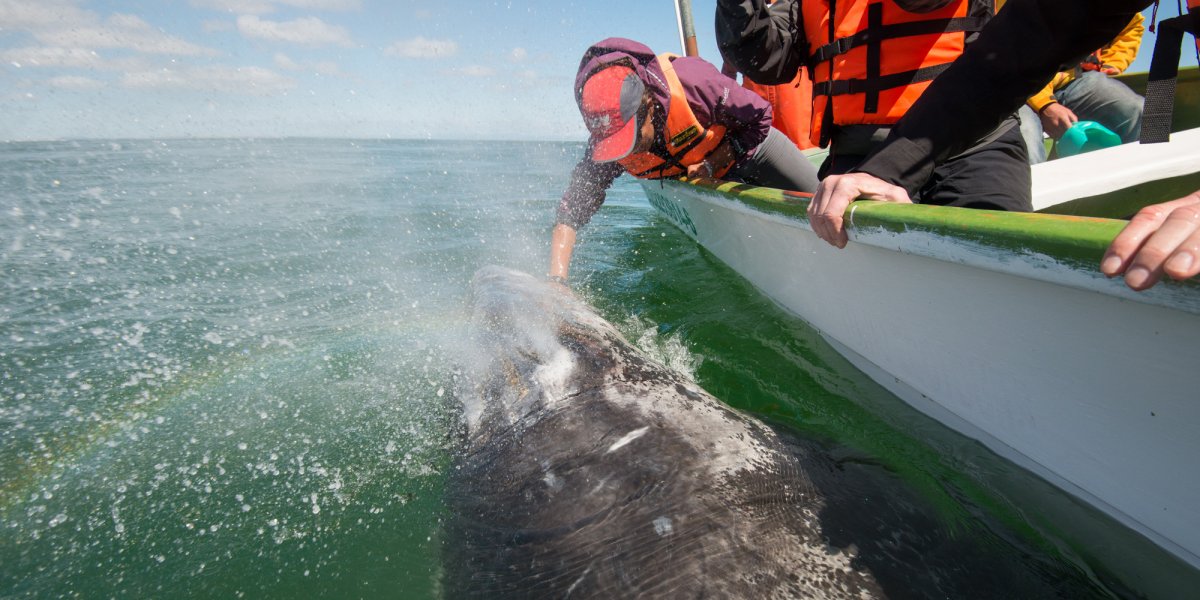 WHAT ARE FRIENDLY WHALES?

For reasons no one can explain, there is a certain percentage of the gray whale population that comes to Baja (known as the eastern Pacific population), that seek out interaction with humans.  This phenomena started in San Ignacio lagoon in the 1970's when a lone fisherman had several encounters with a friendly gray whale.  Today some of the whales approach whale watching boats to play with humans.  Mothers often push their young towards the boat.  Witnessing this is a thrill. 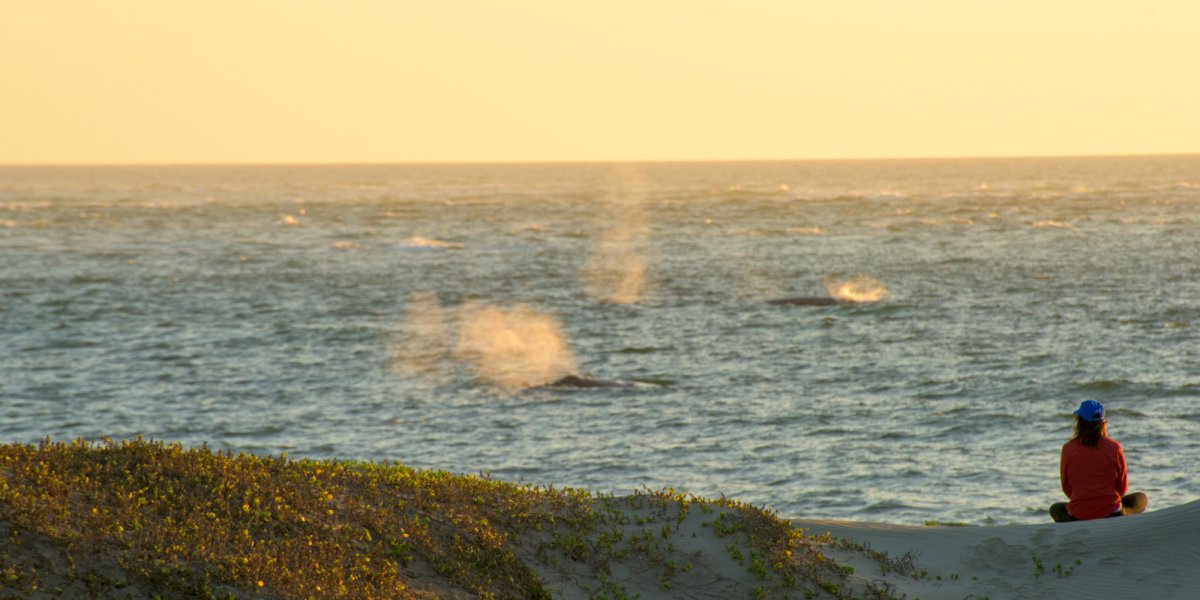 IS IT OK TO TOUCH THE WHALES?

As noted, some gray whales, including those in Magdalena Bay, seek attention from humans and completely alter your perception of whale watching. As a wildlife watcher, it’s important to keep a respectful (and federally regulated!) distance from the whales so that the whales don’t undergo any stress.  We never chase the whales, nor do we approach them directly. Rather, we stop the boat at a respectful distance from the whales, and wait to see if they want to engage with us.  Some do and some don't.  Those that do will swim towards our pangas (whale watching boats for 6-7 people) and, even though they have an entire bay and ocean to explore, choose to come close to us.

Not only do gray whales approach the humans, they do so in hopes to play. If you simply watch the whales, they appear to be disappointed and leave in hopes of entertainment elsewhere. But if you splash the water, sing some songs or give them a good scratch, they playfully hang around in one of the most joyous, intimate experiences you can find in nature.

Long story short: you can’t “chase” after the whales in Magdalena Bay. But there’s really no need to. They come to you. 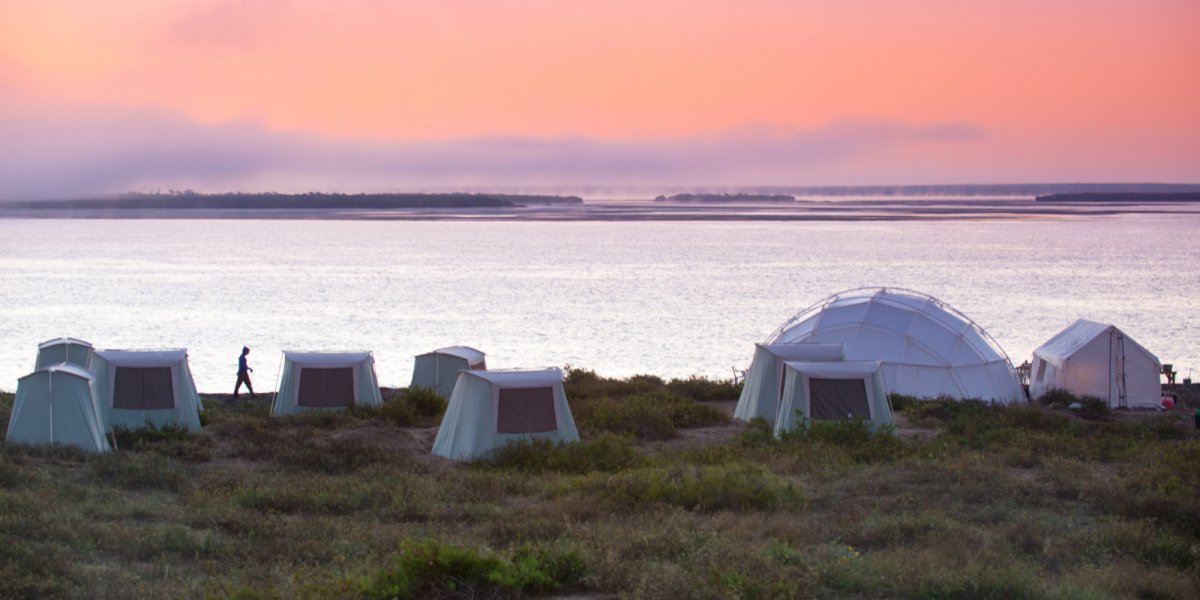 DO YOU HAVE TO GO TO BAJA TO SEE THE GRAY WHALES?

Gray whales migrate along the Pacific coast, so there’s plenty of opportunities to see the gray whales as they make their way toward the border. But can you find the same interactive experience? No.

Gray whales only exhibit their extraordinarily friendly behaviors in Baja’s lagoons like Magdalena Bay. Many speculate that this localized behavior is because the gray whale mothers encourage their calves to meet their human guests when they are only weeks old, nudging them toward the boats. As such, many of the mothers who introduce their new babies to humans underwent the same introduction as calves themselves in Magdalena Bay. Many joke that gray whales are Mexican by birth. It appears that, as it so often goes, you’re always more comfortable at home.

To go beyond seeing the gray whales into playing with the gray whales, it’s worth it to venture into Baja’s remote lagoons like Magdalena Bay. After all, a world unto itself is only a border away. 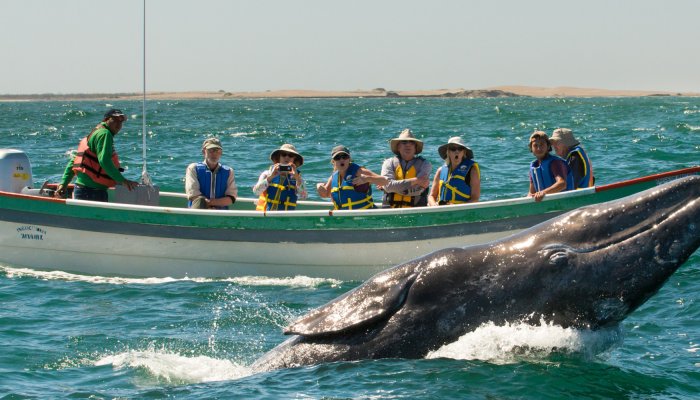 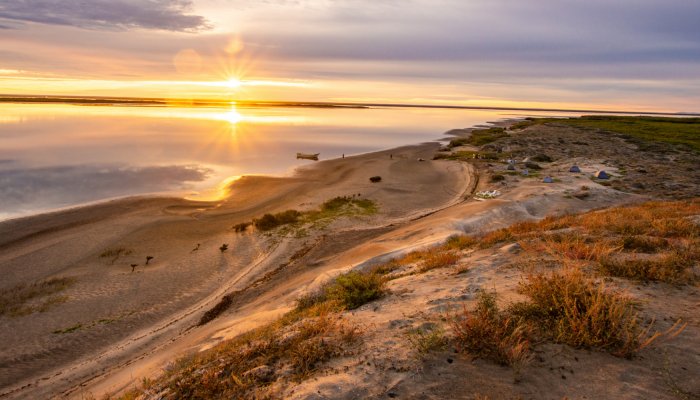 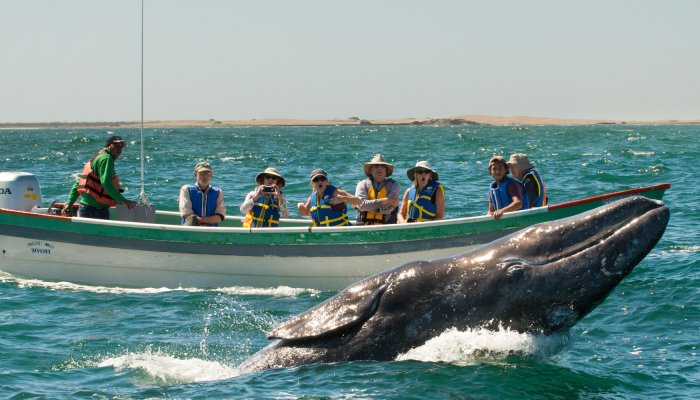 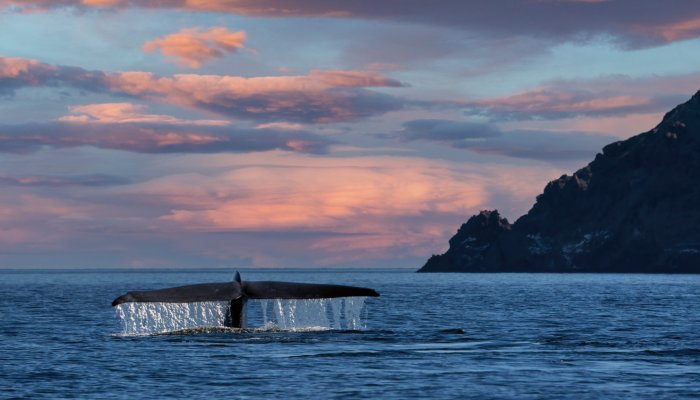