If you’re starting or ending your BC kayaking tour in Port McNeill, there are various modes of transportation for getting to the town. In this article, we’ll introduce the options available for traveling by land and air from the cities of Vancouver, Victoria and Seattle.

Ferries depart from both Horseshoe Bay and Tsawwassen on the edge of Vancouver’s city center and connect to Nanaimo, from where it’s around four hours’ drive to Port McNeill. Campbell River lies at around the half-way point along the drive and is a good spot to stop and rest or refuel.

Alternatively, you can catch one of the Greyhound buses that depart at 5:30 am from central Vancouver and arrive in Port McNeill around 3:00 pm. The journey follows the picturesque BC Route 19, which serves as the main north-south thoroughfare on Vancouver Island.

Traveling by air, there are regular flights (Air Canada or WestJet) from the Vancouver International Airport (YVR) to the Comox Valley Airport (YQQ) on the east coast of Vancouver Island. From here, it’s around three hours’ drive to Port McNeill. There is also a small airport in Port Hardy (YZT), which has regular flights (Pacific Coastal Airlines) from Vancouver, which is the best option if you don't plan to rent a car. Port McNeill is a 35-minute drive from the airport, with the journey costing around $45-60 CAD by taxi.

If you’re flying in from outside of Canada, make sure you allow at least 1.5 to 2 hours between the arrival of your international flight and the departure of your flight to Port Hardy. You will need to transfer from the International Terminal to the South Terminal using the complimentary shuttle bus.

If you’re traveling from Victoria, it’s around six hours’ drive to Port McNeill. A scenic option is to ride the VIA Rail train, which departs from Victoria Johnston Street Bridge Terminal at 8:00 am. After climbing over the Malahat, passing through tunnels and agricultural fields, it arrives at Courtenay on the east coast of Vancouver Island around 12:30 pm. From here, you can rent a car (they will pick you up at the Courtenay train station) or catch the Greyhound bus to continue the journey to Port McNeill. It may be possible to do this in one day or you may need to overnight in Courtenay.

By car, Port McNeill is around nine hours’ drive from Seattle, with the option to either drive through Vancouver (and catch the ferries as detailed above) or drive to Port Angeles (around 2.5 hours away) and board a ferry to Victoria. The journey can be done in a single day, although it’s recommended to overnight somewhere along the way to avoid fatigue.

Alternatively, there are scheduled seaplane flights (Kenmore Air and Northwest Seaplanes) from the Seattle area direct to Port McNeill (YMP). It’s important to be aware that floatplanes generally have limited baggage allowances, so check ahead of time to ensure you aren’t faced with excess baggage fees at the terminal. The Port McNeill Airport is an eight-minute drive from the downtown area. 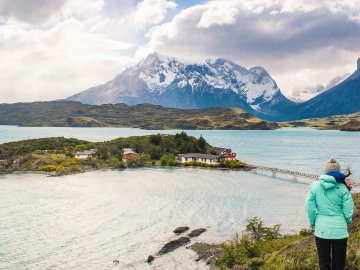