The scientific name for orca whales, Orcinus orca, literally translates to “Demon of the Deep.” In English, they are most commonly known as killer whales. Both names suggest that they are dangerous animals, to be feared, and kept at a safe distance. However, these names come from a lack of understanding of the complexity of the nature of these animals.  The name killer whale comes from the hunting behaviors of “transient” or mammal-eating orcas. These whales actually eat other marine mammals, including seals, sea lions, whale calves, and dolphins. Their hunts often end at the surface and can be very dramatic, even tossing their prey up in the air, and catching them in their open mouths.

It is important to realize, however, that orcas are very picky eaters, and stick to incredibly particular diets. The most common encounters along the north coast of Vancouver Island are with “resident,” fish-eating orcas. These whales eat almost exclusively salmon. In fact, their diet consists of over 92% Chinook salmon, and they certainly wouldn’t touch anything without gills. The transient orca, which roams up and down the coast are equally picky and stick to a diet of marine mammals only, showing no interest in fish, or any other creatures, including kayakers. In fact, there has never been a report of orcas attacking humans in the wild, despite decades of kayakers, snorkelers, and scuba divers sharing the waters with orcas around the World.

At the north end of Vancouver Island in British Columbia, Canada, sea kayaking tours have been paddling the same waters as orcas for a number of decades without incidence.  Here, the most common sightings are with the resident orcas, but sometimes kayakers also encounter transients. 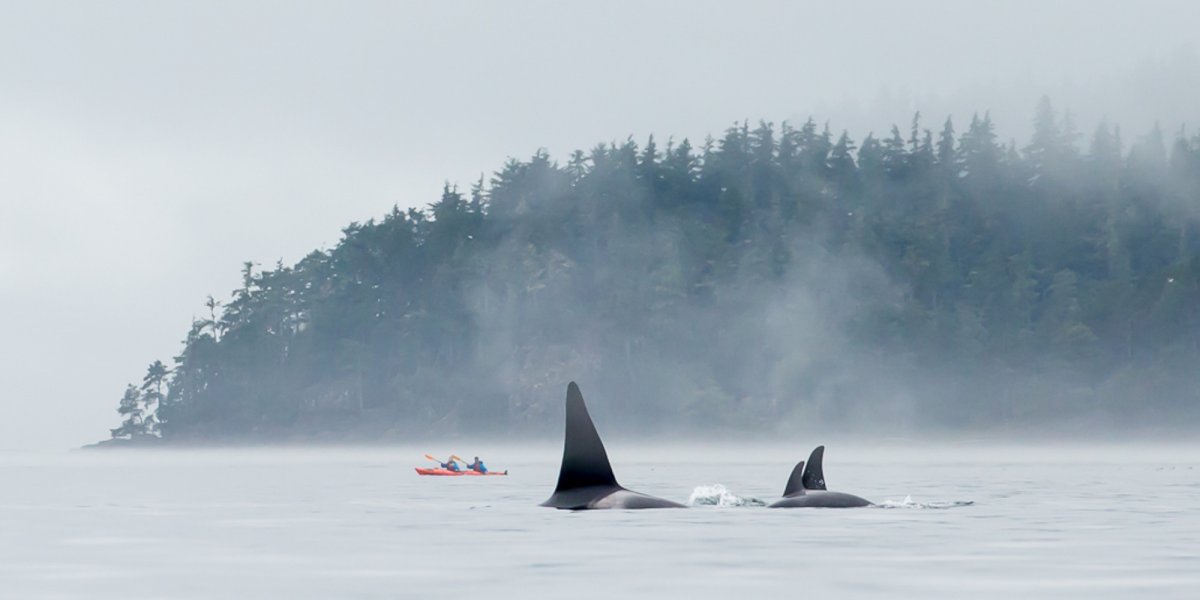 So what’s it like paddling where the orcas live?  First, any encounter you might have is both random and decided by the orcas.  They are the ones who choose to swim near or far from you.  On our kayak tours, when we see orcas that seem to be heading towards us, we group our kayaks together.  This makes us more visible to the orcas and less intrusive to their environment.  Sometimes they are cruising along the same shores we are, looking for fish that may be near the kelp.  In this case, we sometimes anchor ourselves by holding on to some of the kelp.  If we’re lucky, the orcas stay on course and swim right by us, sometimes passing within 10-50’ (3-15 meters) of our kayaks.  There’s no question that our hearts beat faster when this happens (don't believe us - check out this guest reaction).  They may linger near us a few minutes, or keep on their way, making for a brief encounter.  Other times we see them in the distance, traveling along anywhere from 50-300 yards away.  This isn’t as thrilling as having them come close but is still an incredible wildlife experience.  Seeing wild animals in their own environment and on their own terms is always rewarding. 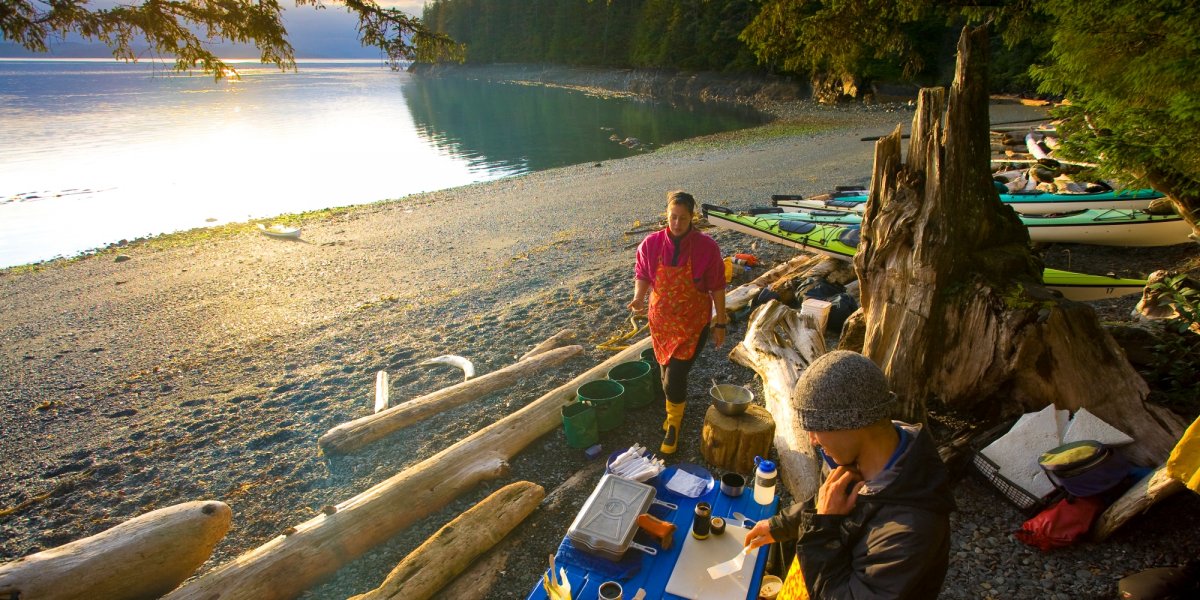 Another opportunity for seeing the orcas within relative proximity is from land near places that are called “rubbing beaches.”  Our camp at Little Kai creek is the location of one of these rubbing beaches where there is a gravel bar just below the surface at high tide that orca pods are known to frequent.  The orcas come here to scratch their bellies on the rocks. Scientists still don’t understand why they do this, but it seems that maybe it just feels good.  On some trips, we are lucky enough to see a pod come and use this area which is just a few yards from a rocky outcropping at our camp. 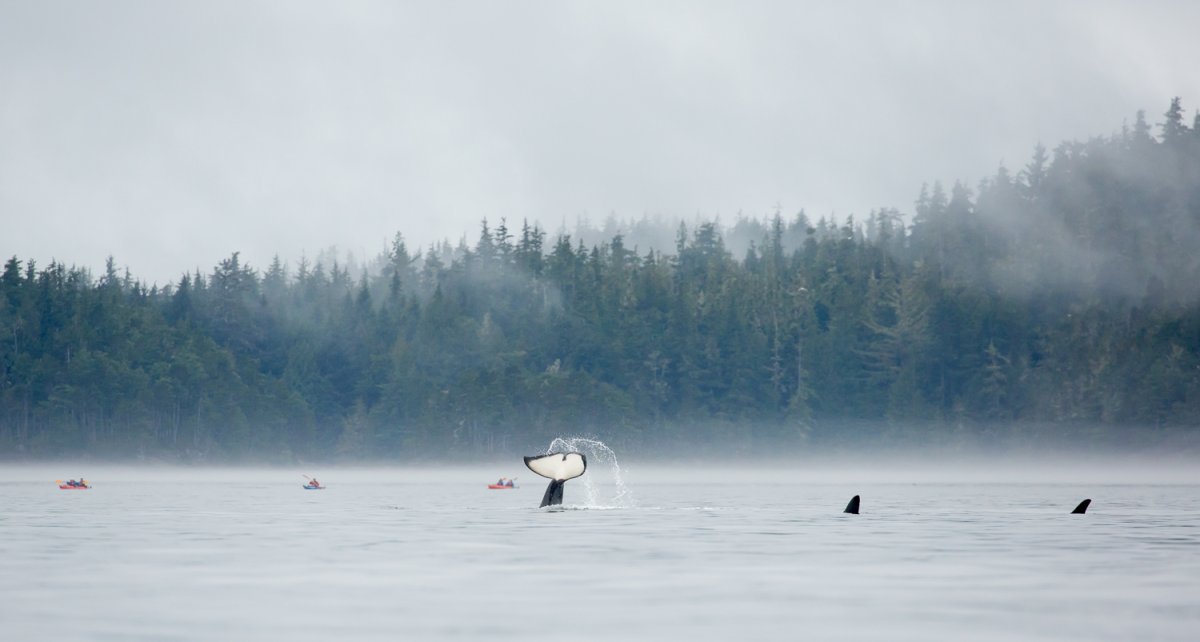 Kayak with Orcas in the Johnstone Strait

Despite how widespread killer whales are throughout the world's oceans, there are very few places in the world where you can kayak with orcas.  Some visit the waters of the Gulf of California in the winter, and can occasionally be seen there if you are kayaking near Loreto.  There are places in New Zealand, off the coast of Norway and in Antarctica where they are sometimes seen as well.

Undoubtedly the best place in the world to kayak with orcas is in Johnstone Strait at the north end of Vancouver Island.  The town of Port McNeil is the kayaking capital of the area, and in this area lives the largest number of resident orcas in the world.  Currently, there are about 230 orcas that come to Johnstone Strait each summer to feed on salmon.  They tend to circle the area, going around islands covering an area of over 100 miles.  With such a large number in the area, the chances of seeing them while kayaking is very good.  Several outfitters offer summer trips in the area and typically the best times to see them are from around July 10 to mid-September.  After that they disperse all over the coast, continuing to chase the chinook salmon, which is their year-round food source. 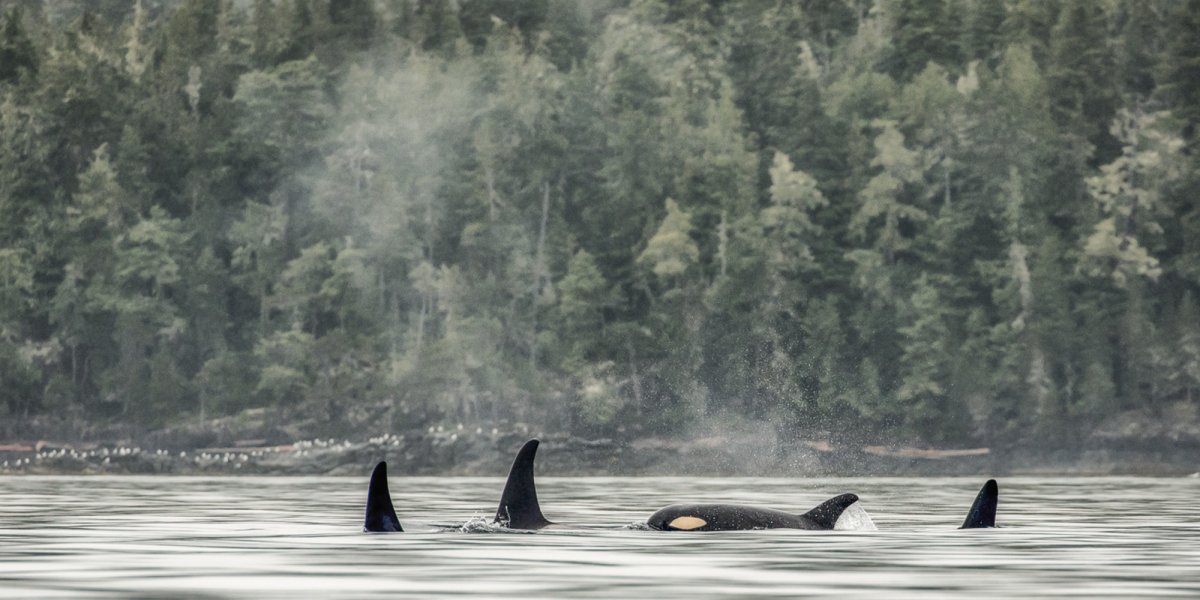 Support Orcas in the Wild

In the past decades orcas have been kept in captivity and put on display for visitors and audiences. At Sea Kayak Adventures, we feel passionate about keeping our encounters and observations in the wild, observing these magnificent creatures in their native and home environments. Blackfish, a 2013 American documentary chronicles the controversy over orcas in captivity and specifically follows the story of Tilikum, an orca held by SeaWorld. This film was not only recognized and nominated for a BAFTA award but helped create a movement of social rejection of the idea of keeping orcas in captivity.  As highly intelligent and social animals, who are born into family units and stay with those families throughout their lives, it’s clear that separating orcas from their families and removing them from their natural habitats is tragic and inhumane.  Fortunately, there is a worldwide movement protesting this which has resulted in some facilities ending the practice of keeping orcas in captivity. 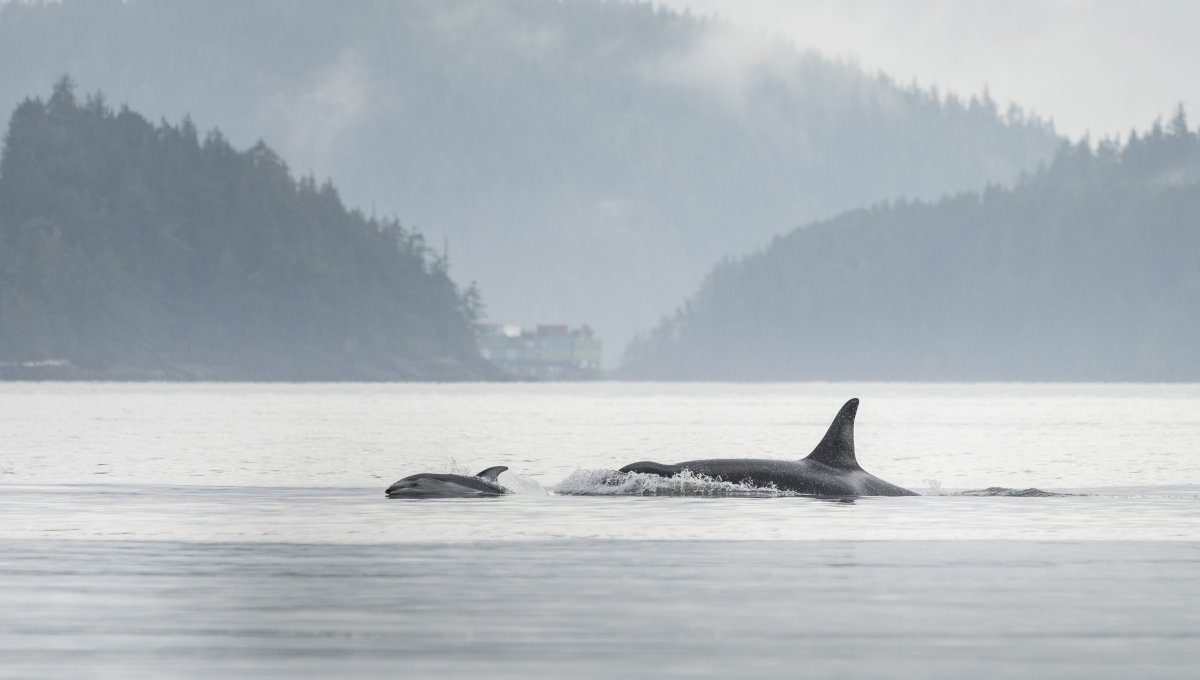 There is still much research ongoing on orcas.  The Orca Research Station Orca Lab located on Hanson Island in Johnstone Strait is one of the main places. They use a series of cameras, and underwater microphones called hydrophones to track the orcas' movements and behaviors..  On nearby West Cracroft Island, another research station called Eagle Eye is where observation and study of the orcas that come to the rubbing beaches in the Robson Bight ecological reserve are ongoing.

Paddling in the waters of the orcas is a life-enriching and sometimes thrilling experience.  We hope you will join us on one of our British Columbia sea kayaking tours!