*Please note that the the following information is meant to provide a general overview of your tour. The specifics of your trip will be contained in a pre-trip letter you will receive prior to your confirmed departure.*

Day 0: Welcome to Loreto in Baja!
Upon your arrival in Loreto take a quick cab ride to your chosen hotel and check into your room (Not included in trip cost).  Spend your afternoon exploring the beautiful town of Loreto.  You can tour the historic Mission located in the center of town, stroll through the local market and dine on authentic Mexican cuisine before meeting your guides in the Hacienda Suites hotel lobby for an evening orientation meeting.

Day 1: Start your journey!
After breakfast the group meets outside the same hotel to board the van for the drive south to our launch point near Puerto Escondido. At the beach the guides will give a comprehensive sea kayak instruction and then we'll paddle the loaded kayaks to Honeymoon cove at Danzante Island for lunch. We’ll have the time to do some hiking or snorkeling. After a short break we’ll paddle to Playa Blanca at Carmen Island which will be our first campsite. This beach will offer good swimming and snorkeling over reef as well as hiking and fossil identification opportunities. We’ll have time to explore the shoreline before our hors d’oeuvres.

Day 2: Sea Kayaking and Camping
We’ll start kayaking around the southern point of Carmen Island. On our way there will be great chances to see different kinds of birds like cormorants, blue-footed boobies, frigate birds, etc. We’ll make our first stop at Punta Colorada to have lunch. This beach is good for snorkeling. We’ll jump back into our kayaks and keep paddling while seeing the rock formations including long cliffs of limestone. Our next campsite is Arrollo Blanco, which is a big beautiful white sand arroyo surrounded by fossil beds. We can paddle into a nearby sea cave just to the south.  This beach offers great hiking and snorkeling.

Day 3: Ghost town at Salinas Bay
After a hot, filling breakfast, we will kayak along the white cliffs to Bahía Salinas. We will be getting closer to a water source so the chance to see big horned sheep will be bigger. We may take a break here depending on how the group feels. We will arrive at Salinas Bay, ready for a well deserved lunch break. After lunch we’ll hike into the abandoned ruins of a salt mine.

Day 4: Kayaking in the Sea of Cortez
Be ready for the longest paddling day as we continue kayaking along the shore line, exploring. At Lengua de Grava beach, we will stop for lunch and a snorkeling break. After, we will head around Punta Lobos where there will be a great chance to discover sea lions. Continuing our paddle, and if the weather allows, we will kayak into the caves that are located just before our next campsite, El Refugio. This is a beautiful white sandy beach and there will be lots of time to explore and talk about the flora.

Day 5: Kayaking in the Sea of Cortez
After breakfast we will jump back into our kayaks and start paddling along the cliffs. After a relaxing lunch break at Otho beach, we will continue kayaking to our next campsite at Balandra Bay.

Day 6: Kayaking in the Sea of Cortez
Balandra Bay is a fishermen camp. We will spend the day at this beach, relaxing, exploring and resting our paddles. There is a nice hiking trail and more snorkeling opportunities.

Day 7: Kayaking in the Sea of Cortez
After waking fully rested and refreshed, we hope back into our kayaks.  We will stop briefly at Marquer Bay to have lunch and snorkel. After this we continue paddling to our next campsite La Terraza where we take time to appreciate the cacti vegetation of this area.

Day 8: Kayaking in the Sea of Cortez
We’ll start our way to our last campsite El Faro. The large sandy point of this beach offers some of the best wildlife viewing in the area.  Enjoy long hikes north to canyons and south to fossil beds and beautiful white sand beaches.  Snorkeling along rocks south of camp will offer more sea wildlife viewings.

Day 9: Return to Loreto
A last relaxing morning will be spent under the beautiful Baja sun, sipping on your hot coffee or tea while you contemplate your journey around Isla Carmen Island. After a final lunch, we break camp and paddle to our take-out site around 2 PM. Once van is loaded, we will proceed back to Loreto to check into your hotel. Enjoy reminiscing over the past week with your fellow travelers and guides at a No-host farewell group dinner at a favorite local restaurant.

Departure day. Say good-bye to lovely Loreto and head back to the airport to fly home, or consider a  Day tour  add-on option.

Please see our Baja Travel Guide for full details on travel to and from Baja.

Baja has a desert climate. The weather is typically dry, warm, and sunny, with temperatures ranging between 60 - 90 F. While it may be very warm during the day, temperatures can drop down to the 60’s during the evening hours. Please plan to pack appropriate layers for the evenings.

If you are interested in more specific information regarding the weather in Baja, we highly suggest this website; wunderground. If you put in the location you are traveling, and the date, it will provide you with historical weather data that you can use to plan for your upcoming adventure.

The area is a UNESCO World Heritage Site and offers the perfect blend of Baja kayaking, hiking and snorkeling. Abundant wildlife, massive whales, sunny weather and warm, crystalline waters make the Sea of Cortez in Loreto Bay National Marine Park one of the best winter sea kayaking and whale watching destinations in North America. We offer kayak tours between the months of October and May with January through April being the peak whale watching season.

PHYSICAL REQUIREMENTS
Here at ROW Adventures our first and foremost goal is for you to have an enjoyable and safe experience. While most of our trips are suitable for beginners, some of our trips are more active than others and it’s important that you understand the physical requirement of the trip you choose.

All of our multi-day rafting trips are active adventures that involve some level of physical exertion and possible exposure to the elements including but not limited to wind, rain, heat, sun, cold temperatures and cold water conditions.  ROW Adventures is able to accommodate people with physical limitations, disabilities and medical conditions; please speak with your Adventure Consultant if you think you will require any additional assistance while on the trip.  We ask that you consult your Doctor if you have health or medical conditions that could impact your ability to participate in an active and outdoor adventure.  In general, all trip participants must be able to do the following:

Whether you are an avid sea kayaker, or it is your first time, you’ll enjoy these incredible trips, and share in our passion for adventure, commitment to conserving the environment, and relishing unique experiences. For those new to the sport, kayaking is easy to learn in the sheltered waters that we visit, and we provide all of the camping gear, kayaking equipment and guidance needed. In addition, we keep our groups small to allow you to not only travel intimately among nature, but to ensure you receive the necessary attention from our guides.

The packing list outlined below is meant to serve as a guide to help you plan, prepare and outfit yourself for your upcoming travels. We have provided our best recommendations and suggestions. These suggestions are broken down by your tour type and are based on the outlined itinerary, the geographic region, our knowledge of Baja, and our personal experience. We hope you find this list helpful, use it as a guide and feel free to amend it with your favorite travel items too!

At the orientation meeting on the evening, before we start kayaking, we will provide each guest with 3 dry bags (two 20-Liter bags and one 10-Liter bag). Your kayaking guides will provide a full explanation of how to use and pack your dry bags. That evening you will pack all of your gear for your kayaking tour into your three dry bags. One of your 20-liter dry bags will contain your sleep kit; the remaining 30 liters of space in your dry bags is for your personal gear.

The rest of your luggage can be checked into the locked hotel closet the following morning before departing for your tour. 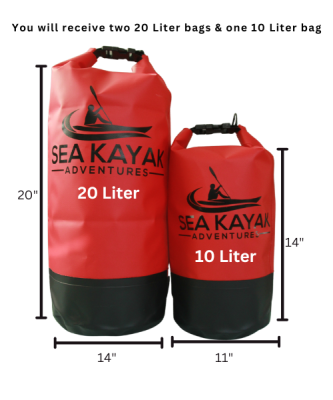 We will provide you with a shorty wetsuit, snorkel mask, fins, and PFD.

Sea Kayak Adventures trips are best enjoyed if you travel light. We think it is wise to avoid checking any luggage under the plane. If you do check a bag, make sure that you have everything that is either essential or would be hard to replace, with you in your carry-on.

We recommend packing in one soft sided, roll-on (ideally a non-hard-sided version) or duffle luggage that meets carry-on requirements. Alternatively, if you must have a checked bag; make sure your personal item is packed with your “hard to replace items.” You will be able to leave luggage not needed for your kayaking trip in hotel storage.

We also recommend bringing one small day pack.  This dual purpose pack can serve as your personal item during your flights as well as your day pack for hikes during the tour. Outside zippered pockets are nice and allow you to organize your travel gear. Carry medications, travel documents, important personal items and other essentials or “hard-to-replace” items in this on the plane. 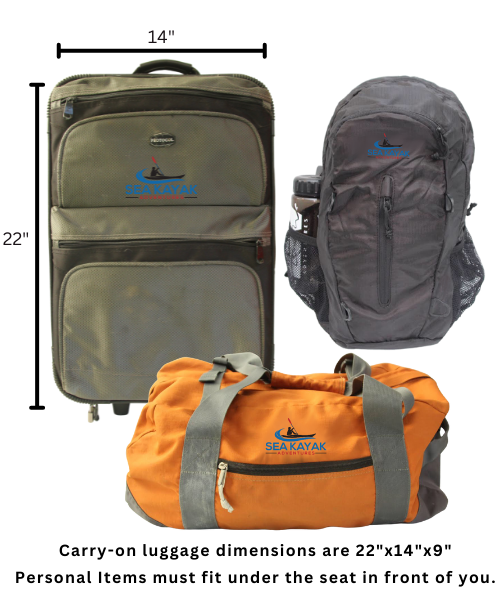 We highly suggest that all of your kayak clothing is synthetic or wool, not cotton. Synthetics are also ideal for activity, as they wick away moisture from the body and dry quickly. Added SPF protection in your clothing is always a great option for Baja. We recommend keeping one outfit out of the following packing guidelines as a “pre and post-activity” outfit for mornings and nights at camp.

*The suggested numbers of clothing items are based on a one week adventure tour. We suggest using 1-2 kayaking or touring outfits, and 1-2 camp outfits that you will reuse throughout the trip. You are welcome to bring extra clothing for before or after your trip.

Mosquitoes and no-see-ums (sand flies) are sometimes present during our Baja tours. Please ensure that you pack a quality insect repellent and consider full coverage clothing for the evenings and time around camp. The full coverage clothing will provide great sun protection as an added bonus. We recommend repellent with DEET or Picaridin Insect Repellent (Picaridin is less toxic and less harsh on gear/clothing than DEET. Here is one example of a Picaridin-based repellent.

Weather Report- Check the local weather before you go.

Sea of Cortez - The amazing geology, flora, and fauna of this region

Baja Travel Guide - Additional information on travel to and from Baja

Meet the SKA Fleet - The boats of Sea Kayak Adventures